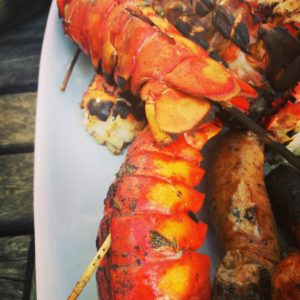 I feel like a lot of people shun lobster for whatever reason.  Maybe they think it’s too expensive, or too much of a hassle to deal with?  But this is a simple way to use a little bit of lobster to flavor an entire dish.  And now that grocery stores are good about providing spiralized veggies I knew we could make a filling and healthy pescatarian dish.  I’m a big believer that long-noodle dishes should contain minimal sauce (save your marinaras and the like for shells/penne/bowtie where there are crevices to scoop up delicious sauce!), so this meal features just enough butter and oil to deliver the full flavor of the veggies up front.

½ bunch of Italian parsley, chopped (plus a little more for garnish)

2 Tbsp olive oil (plus more throughout recipe for sauteeing)

Recipe by Vie at https://getvie.com/free-meal-plans/